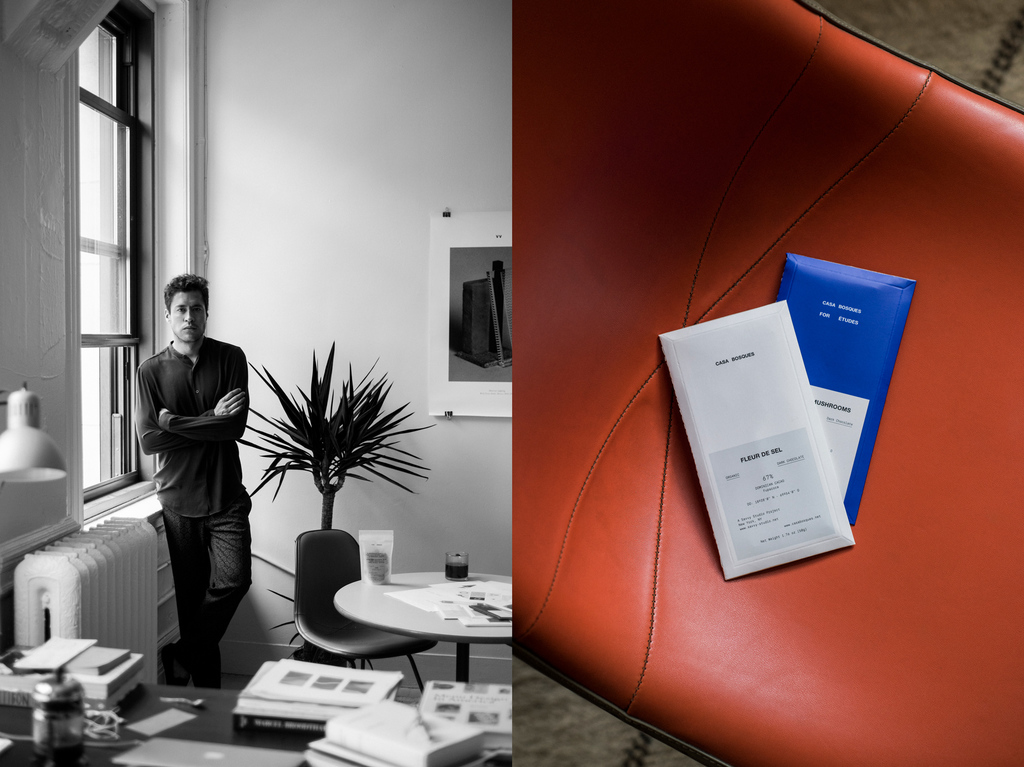 Some people can be transported to a specific place in time when they smell a particular scent. For Rafael Prieto, the creative mind behind Casa Bosques chocolates, taste does the same thing.

Guided by memory and intuition, Rafael Prieto (aka Rafa)—the co-founder of Casa Bosques Chocolates and the creative studio Savvy—uses chocolate as a way to capture moments in his life. Each flavor he produces is no accident but, instead, speaks to a place and an atmosphere. The result is dark, almost-ebony bars of chocolate that are layered, intellectual, smooth and surprising. None of them are overly sweet—Prieto’s palate doesn’t run that way—and they come wrapped first in gold foil and then Casa Bosques’ clean, pared-back packaging. We speak to Prieto about how he came up with them.

annette lin: Let’s get straight to it—how did you start making chocolate?

rafael prieto: About six years ago I was traveling in Europe and tasting many chocolates, dark chocolates, and at the time in Mexico everything was made with milk and was imported, with a lot of sugar. And I was like, why don’t we have dark chocolate? We have really good cacao. We’re the source for all these people making chocolate, but we don’t have it.

So from there I started, and I thought, yes, I would like to have my own chocolates. That’s why I do branding—because I like to work and develop ideas and new ideas and ways of telling stories. And it’s not just for Mexico—Ecuador and Venezuela are also amazing sources of cacao, but no one was making dark chocolate.

al: How did you get the ball rolling on that?

rp: I started looking for different chocolatiers. I found someone in the north of Mexico and we got along really well. He has this amazing technique, and he’s interested in making chocolate and the making it the way it should be. We’re not making raw chocolate. We’re about using human intervention and using the right technique to make the cacao refined and soft.

al: Where do you get your inspiration for the flavors from?

Every chocolate represents a moment or a place. We started with pink peppercorns from Mexico, the sea salt with Venezuelan chocolate; the curry—they all represent random times in life. I was literally living in Berlin and eating a lot of coconut curry at the time. And then we were working on this project in Kuwait and there, no matter who you are, everyone gets together in the center of the city and drinks cardamom. From the richest man to the poorest, they just go to the same place and nothing matters, because they’re drinking tea. So we have this cardamom flavor that comes from that experience of getting together and drinking.

The wasabi and almond flavor came from when I was in Japan. And the puffed quinoa, coconut and turmeric one comes from your childhood, when you used to eat chocolate with a crunch, with the puffed rice, and the idea was, how can we achieve that and bring it to what’s happening now? So we switched to quinoa and used turmeric because of its healthy properties. But it’s all about places and moments and experiences, and it’s very intuitive. Sometimes nothing happens to me in six months so I don’t do much. And then things happen, and I end up doing three in six months—so it depends on how life is going.

al: What is your favorite part of the process?

rp: I like it all, but I think—that feeling I get in my stomach when I actually make the flavor happen.

Sometimes I have one in mind—for example, I’ve been trying to make one with cheese—which is pretty much impossible. I tried it with parmesan and camembert, and it tastes great, but it won’t last on the shelf for more than two weeks. But when one happens and it tastes good, I really enjoy it. Because sometimes it takes a while to get there.

al: Tell me about the ingredients you use.

rp: I’m not tied to one type of chocolate. I switch different bases. At the moment we have cacao from the Dominican Republic, but we’re probably going to change to Venezuela and Colombia.

I had an evolution a year and a half ago and also switched from normal cane sugar to coconut sugar, so it was better for you. The way I eat chocolate is to feel cozy at 6pm and indulge at night, when you’re treating yourself and you’re being nice to yourself—and I wanted to make that even better.

al: Which one is your favorite right now?

rp: I always have my current thing that I’m really into. Right now I’m making this cashew chocolate with rosemary and cardamom. I like the cardamom one, but this week I’ve been into the rosemary. I go back and forth.

al: Do you have any memorable moments around food?

rp: Yes. Most of my greatest moments have happened around food. Family-wise, being with friends, being at this huge dinner and sharing, laughing a little with good wine—those are the things that I love. ■

Annette Lin is a New York City-based writer who covers fashion, art, design and travel. Find more of her work at www.annettelin.tumblr.com.