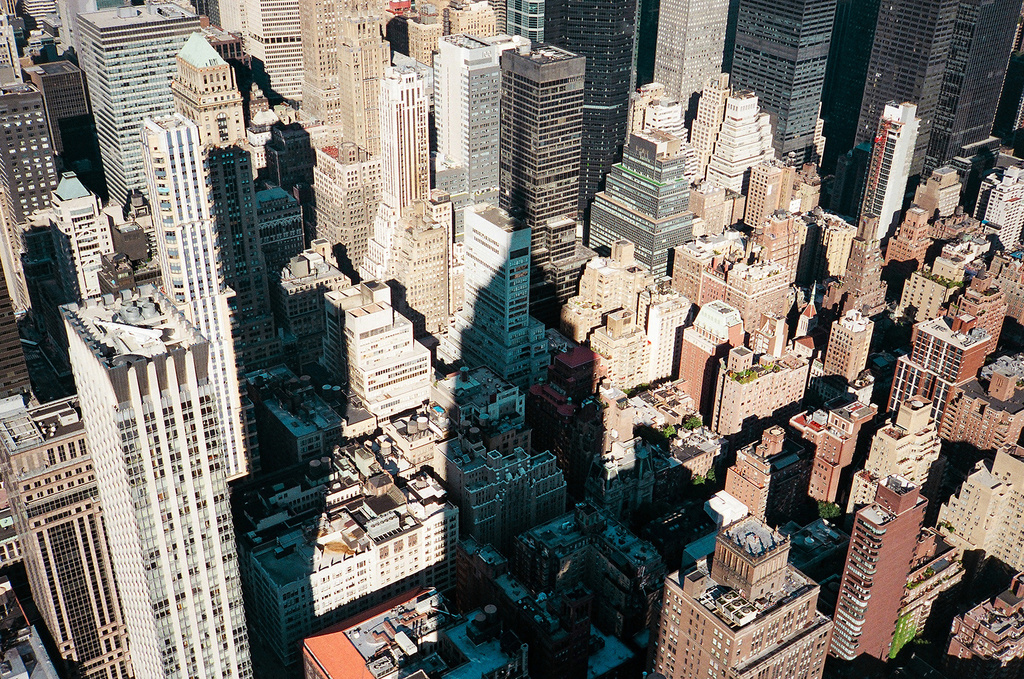 Daniel Arnold’s street photography has a nose for the candid, the serendipitous, and the ugly. Taken during his long walks through the streets of New York City, his snapshots have become famous through his now-legendary account.

thom bettridge: Your street photography has such a candid feel. Tell me a little bit about your process.

daniel arnold: From my point of view, even calling it a process seems like over-selling it. The photography part of it has almost been secondary to this habit I have of aimlessly wandering around. For as long I’ve lived here, that’s been my go-to recreation. So the process ends up being that I will tune out any kind of specific ambition or idea of what’s going on. I’ll just keep my eyes open and see what happens.

tb: Are there particular neighborhoods that you’re drawn to while you’re on these walks?

da: I have a soft-spot for Fifth Avenue in the ’50s. If I’m going to set out on a proper day, I’m usually going to start there.

tb: There’s a lot going on there. You get the tourists, you get the street vendors…

da: And you get this bizarre class of anachronistic, old rich people who look like old New York. You also get this epic classic New York backdrop.

tb: It’s funny you say “anachronistic,” because I feel like your photos have a pretty anachronistic quality across the board. They’re current, but they also have this also ’70s quality—the New York of Wildstyle or Midnight Cowboy. Is that something that you’re consciously interested in capturing?

da: I don’t know exactly what it is. That aesthetic appeals to me, especially in the context of photography. Things look more interesting if they don’t fit into the current, so I’m definitely attracted to a photograph when there’s something timeless and irreplaceable about it. That idea of Old New York still being around is definitely something I’m drawn to. It’s still there in small traces if you look close enough.

da: I think it’s the idea that keeps people coming here—it being this sort of mythological, classic place. It’s a very American, aspirational, “anything is possible” kind of thing. But then I like to match the aesthetic of that myth with the truth. You get the players in the backdrop of these classic scenes, but then something is also kind of off or wrong.

tb: Your take kind of differs in that sense from a lot of the New York street photography you see around. It’s not all glam and romance. There’s almost something dirty about it. What draws you to that type of image?

da: It’s just a personality thing. I just think that those revealing human flaws are more interesting than an advertising photo. There’s enough of those types of photos, there’s too many of those. I’d rather make something that’s vaguely disturbing, something that points out what a scam everything is in a small way.

tb: It’s almost like you’re excavating the underside of this New York dream.

da: I try to. I also don’t think it’s specifically New York. It happens that I’m here, and that’s a great backdrop for it, but it’s a story that exists everywhere. A new understanding that I had of it came recently when I was making a portfolio website for the first time. For the sake of being quick and getting it done with, I made these very basic categories—“men,” “women,” and “children.” After I got all those portfolios in order, I realized that I was making this kind of democratic document of my perception of being a man, or being a woman, or being a kid. It was a journal of all the boring shit in life. But what I’m looking for are the moments when the boring becomes weird and becomes something else, when it becomes haunting and mysterious.

tb: I noticed on your website that you have this picture of a couple in a cab where they’re pointing at you angrily, and you can sort of imagine them saying, “Hey, don’t take my fucking picture!” How do you think of your relationship with these strangers that you’re taking pictures of? Do you ever feel like you’re invading their lives?

da: No. Sometimes to the extent of delusions of grandeur, I feel this sort of symbiotic thing with them. I understand why they’d feel threatened by it, but I do it in such a loving way. I feel like I’m making a tribute to this people. I’m making a record of them that, if we’re lucky, will outlast us. It feels worth the very brief invasion to make that happen.

tb: Even the portrayals that are a little more ugly?

da: People always get the wrong idea about those, that I’m doing it in a mocking way, or that there’s something cruel about it. But I love those people. I love that ugliness. I relate to it more than I relate to beauty. That’s my experience of the world. I feel like an ugly freak and I think that’s much more interesting than everything going as planned, or everything looking the way you want it to look.

tb: There also seems to be a kind of sympathetic comedy to a lot of it.

da: Yeah. In my spaced-out moments of self-analysis, I think of myself as having this purpose of going around with my eyes open and being delighted by the world.

tb: You got some press this past year about selling photos through your Instagram. How did that whole thing come about?

da: It was a very impulsive, low-expectations kind of deal. I had the idea to sell photos for a long time, and the interaction with the audience made it seem like an obvious step to take. But it’s still a big step to take, asking those people for money and finding a logistical way to actually pull it off. That always made me feel hesitant about the idea. I thought I should maybe keep it pure and not bring money into it, but I was feeling reckless and broke, and it was my birthday, so I figured, “What the hell? I’ll give it a shot and see what happens.” Then it just went crazy.

tb: Were you surprised about that?

tb: Did the experience help you relate to your audience in a new way? Your photographs had already been popular on Instagram at that point.

da: I don’t think it was new, necessarily. That’s the thing about Instagram, it provides this direct dialogue in an unprecedented way. I’m not the most inviting with that stuff, I don’t engage that much, but I do have a pretty vocal audience to the extent that I feel like I know these people. I’ll meet people on the street who recognize me, and they’ll tell me their username, and I’ll be like, “Oh yeah, I know you.” Because I pay attention to it. It’s part of the whole process at this point, that you have this dialogue that comes from photos.

If you’re actively engaged, you have to come up with something new constantly, and to the extent that those images are disposable, the artist becomes the center of the conversation. You’re getting this kind of auteur view of things.

tb: I was wondering how you felt, as a photographer that publishes work on Instagram, how you think that format has affected the medium.

da: I think it’s early to really tell. I think that, after some time passes, people will be able to accept more openly that there is something fantastic about mobilizing all these people who didn’t even know they were photographers. Even if 99% of them are just taking pictures of themselves, or their food, or whatever, I think that it’s really inspired tons of people. Even if it’s compromised people’s ability to make a living, which seems like an argument coming from above, I think that it’s inspired a lot of people to think photographically.

tb: Do you feel like there’s an over-saturation of images?

da: I definitely think there’s an over-saturation. As someone who spent a lot of time working in music early on and got really burnt out on it, I saw a similar thing there. Everybody has access and everybody can put their thing out there. But I think that there’s something about devaluing the individual image and making it less precious that does more to spotlight the artist than the photo. You end up having to justify yourself every day. If you’re actively engaged, you have to come up with something new constantly, and to the extent that those images are disposable, the artist becomes the center of the conversation. You’re getting this kind of auteur view of things.

tb: Do you see your own Instagram as a type of journal in that sense?

da: Any kind of understanding I have of my Instagram, or any analysis of it, is like a secondary thing. None of it is really calculated, but I’ll spend plenty of time looking at these photos and wondering what the hell I’m doing. Seeing it from that vantage point, that’s where I start to understand it as a journal, or as a kind of emotional communication. But in the moment, you just see something interesting and throw it up there.

tb: It’s a way to communicate with your own work.

da: Yeah, and to create this abstract, emotional document of my state of mind. But I don’t know that’s what I’m making when I make it.

tb: But as someone who puts so much time and creative energy into your photos, does it feel weird to throw them into an Instagram feed with everyone’s selfies and cat pics? Or do you enjoy having your work in a soup with all those things?

da: I like the soup. It’s a license to fuck around. I don’t always have to be some serious, meaningful photographer. Sometimes I’ll be in a jackass mood and I’ll put something ridiculous up. I like getting to be a human being about it, getting to be the person and not the story.

tb: And it’s almost like a focus group. You’ll get this immediate reaction from the public. Do you pay a lot of attention to the reactions you get on social media?

da: That can go both ways. When there’s an overwhelmingly positive response, or an overwhelmingly negative response, that ends up coloring how I feel about the photo. But I take those both kind of equally. A negative response is just as valuable to me as a positive response. I like that there’s this whole community element to the photos that I have no control over, even though most of time it makes no sense and completely misunderstands my intentions. It’s kind of this shitty graffiti that ends up on all the photos.■