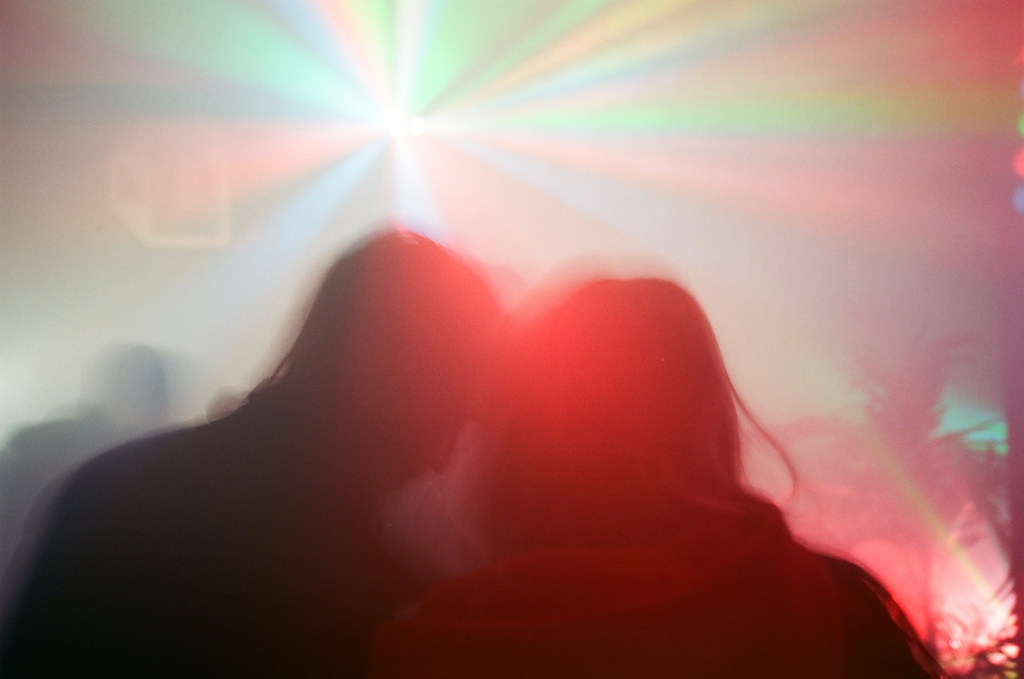 Nazar Khamis’ collection of 35mm film photos peers into the lives of New York City’s uninhibited youth. When he’s not out snapping photos, playing in his band The Gnarcissists, or collaborating with friends on short films, Khamis can be found working at the Saturdays warehouse.

colin tunstall: First off, who is Shelley Duvall?

nazar khamis: Who’s Shelley Duvall? I think I know what you’re asking me for, but it’s literally—there was this YouTube clip that basically damaged my brain, and I think that…that’s pretty much it. There’s this compilation of her opening for the TV show she was doing or something like that, but it was all these different decorations and sets behind her and she just goes, “Hello, my name is Shelley Duvall,” and basically if you watch that 20 times, your brain is damaged.

ct: So that really captivated you. So you’re brain damaged.

ct: Tell me about your coming to New York City.

nk: First of all, I didn’t even plan on coming. It just happened that way. But before coming I was really interested in a lot of things that I couldn’t experience where I was, so it was too real for me to be in New York. I was like, “Wow.” I couldn’t believe it.

ct: Where are you from?

nk: Well I grew up in this small village somewhere in Ukraine, and then I moved around. And before I moved to New York I lived in Kiev, which is probably the best place to spend time. You know, the city.

ct: So when did you move to New York?

ct: You would have stayed in Kiev if you were over 21?

nk: I’m not sure how that would have gone. I’m pretty sure I would have ended up here, but I feel like 20 is the perfect time to move to a different country. Well, not perfect but not too late, know what I mean? Because I still kind of experienced growing up—that 21, 22-year-old age period that helps form you.

ct: So how did you pick up a camera? Was that before moving to New York or after?

nk: I didn’t really know about film or film photos or photography in general. I think my friend had a camera and he was artistic and he experimented with film and pictures, and I wanted to do it too, but I had no idea about cameras or anything like that. So I started asking around, like asking my grandma if she had a film camera. And then someone gave me a Pentax SLR. It was a really nice camera. So I started shooting and the pictures were coming out real nice. So I was like, “Oh wow,” this is a whole new experience.

ct: What do you consider a good photograph? Why do you choose to take the pictures that you take?

nk: Well, with time, your thoughts and processes of taking a photo change. In the beginning, I just wanted to make sure that the photo was in focus and the colors were good. But later on I became inspired by a lot of other photographers, so I kind of changed the way I was looking at everything. It’s like once you’re hooked, then everything is a picture. And then, you know, you start noticing, “Oh, there’s this kind of photography and that kind of photography.” What’s the quote about how you look at someone’s art and you don’t steal it but you’re inspired by it? I can’t remember that quote but that’s basically what happened to me.

ct: So what else is happening besides photography right now? It looks like you’re acting in a weird murder movie and you’re also in a band and you’re also shotgunning some beers and other things.

ct: (Laughs) The beers are band-related?

ct: Walk me through a week in Nazar’s world.

nk: I’ve been going to a lot of shows around Brooklyn and the city, and I think that’s just how you meet people. And my good friend Jin, she’s a photographer and a videographer and she was like, “Hey Nazar let’s just do something fun. I have this VHS tape. Let’s make a movie!” And I was like, “OK,” but you know how some people say something but they don’t do it? So I was like, “Yeah I’m down,” and then a week later or something she was like, “Hey want to meet up?” and I was like, “Yeah I’m skating, let’s go. What do you want to do?” And she was like, “I don’t know. Let’s just test it and try some things.” So we started, and it was fun, and then people were asking me what we were doing. And then my friend finally wrote a script and then we started casting. There’s no budget. It’s all VHS. We get paid in beers and stuff like that. So it’s mostly just spending time with your friends and doing something fun.

nk: But we are trying to finish it. It looks great. We’re trying to premiere it and do a party, because it’s been kind of a long way. But yeah, it should be out somewhere sometime. I’m not sure.

ct: Is it mostly Ukranians and Russians working on it?

nk: That’s the whole theme. I’m actually the main character and the whole theme is me coming to New York broke-ass, trying to make money and then I start doing drugs and shooting people and, you know, all that. It’s kind of a classic gangster movie.

ct: He’s on holiday right now but he’ll be excited to hear that. When’s the next show?

nk: Actually our first show is next week. It sounds kind of ridiculous but we’re playing at Ludlow House.

ct: Awesome. That does sound kind of ridiculous.

ct: You’ve been with us for a while. What do you think of Saturdays?

nk: I love the vibe of the crew and all the things we’ve been doing. It definitely makes me think of how I met other people. It’s kind of the way people meet in New York. I think it kind of helps me meet other people in the community.

ct: Are you growing anything on your desk? Any plants?

nk: No plants. I don’t think this warehouse is built for plants yet, but I love plants for sure.

ct: Any final notes or anything from the brain of Nazar—YouTube clips or memes or interesting tidbits of information you’d like to share?

nk: I don’t know. This is making me uncomfortable. I’ve never been interviewed before.

nk: Well, I guess, to all my fans: 100% respect, skateboarding saved my life.

See more of Nazar’s work at www.nazarkhamis.tumblr.com.
Previous Pima Cotton
Back to Top
Next Larry Clark