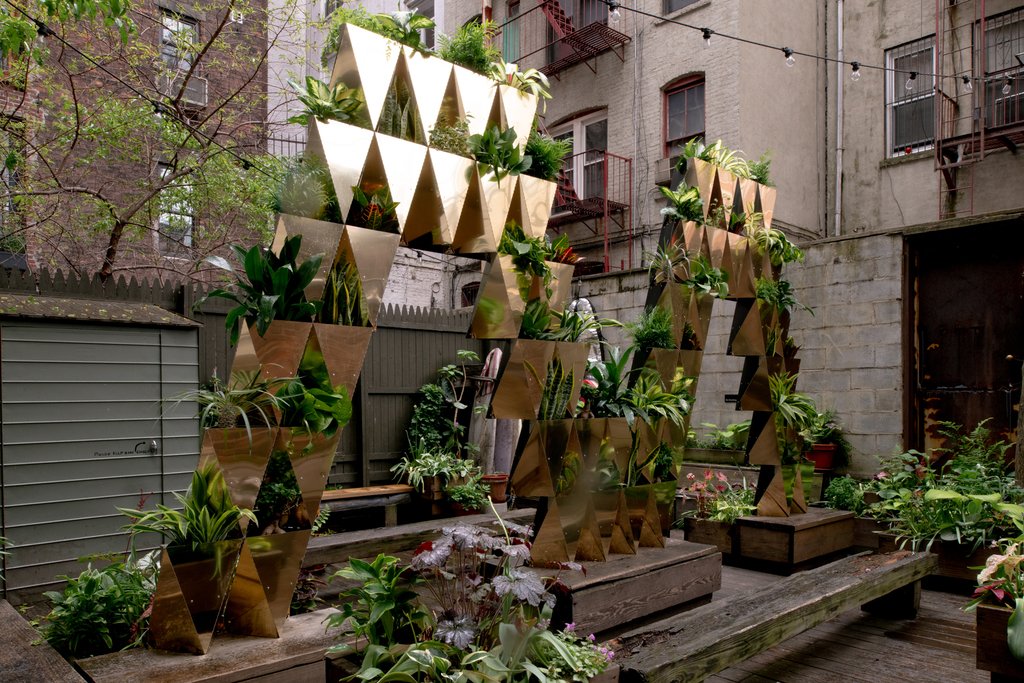 Brooklyn-based design studio The Principals bring their Golden Arch to the backyard of our Crosby Street store for Sight Unseen OFFSITE from May 17-20. We spoke to its designer Drew Seskunas to learn more about the plant-filled prism.

colin tunstall: Can you give us a brief synopsis of the Golden Arch, its materials, your process, and how this all ties in with Saturdays?

drew seskunas: The project is designed using a system that I developed with my studio The Principals as part of the more experimental work we do. The structural system is made from folded, laser-cut aluminum. It’s kind of a stacking, modular system that allows people to create vertical gardens, and that kind of developed out of a lot of our systems research. We were creating these structural systems and realized, “Wow these would be wonderful vessels to make vertical gardens.” We thought this would be a really easy way for people to incorporate greenery into their homes or into commercial spaces that don’t require intensive structure and they could customize themselves. We wanted to create a larger-scale installation to show what was possible with it, and we thought the backyard of Saturdays would be an awesome place because it’s this beautiful area that’s so typical SoHo.

So we thought about how we could incorporate it into this space, and the idea was to create this wall that kind of divided the backyard into two, that people could pass through, and it would dip down and create these arches. The concept actually started with this super old surf video called “Bunyip Dreaming” by Jack McCoy. I loved that name, but I never really understood what the derivation of it was. But a bunyip is this mythical creature in aboriginal culture, and there’s this concept of the dreamkind, which is the division between the ancient world and our real world. And they believe the Earth was created by these dreamkind ancestors that emerged from the earth and then built all of the things that we see, then went back to sleep in the rocks. There’s this duality of the awaketime and the dreamtime, so we wanted to create the wall that you could pass through to represent that.

ct: To back it up for a bit, where are you from and how’d you get into surfing?

ds: I grew up in Baltimore. It’s a coastal city but still pretty far from the ocean. Two and a half hours is probably the quickest you could get to the beach. I started boogie boarding when I was five or six because my uncle was a lifeguard and he surfed. My brother and I were the oldest nephews that he has, so he would take us out boogie boarding. Then when I was around 11 I got my first surfboard.

ct: You mentioned to me earlier that your brother moved to California. Did you spend some time there as well?

ct: So it sounds like surfing has been a big part of your life from Maryland to California and you’ve taken that with you, and it’s even informed the work that you do now.

ds: Yeah totally. It’s so hard not to incorporate that stuff. I think people around our age that like surf culture, it was such a big part of growing up that you kind of realize when you get older how much it’s impacted how you think about the world and influenced everything you’re doing now.

ct: With the planters, do you have a specific vision of how they’ll be used? Have you been surprised by what people have done with them?

ds: There have been some instances where we’ve done a schematic design for a particular area or for the planters to be used in a particular way, and then we’ve gone back a few months later and have seen them used in completely different ways. It’s been really rewarding. I think as a designer you want to create something that people can use, and if they do use it and take it and do something more with it, then that’s validation.

ct: Do you have any expectations for how people will react or participate in this particular project?

ds: I’m pretty interested to see how it starts to play with the space. A lot of the existing materials and arrangements in the backyard are worn in and feel very comfortable there. So I think that the materiality of the arch will be a little alien in that space to a certain degree because it’s a gold, shiny, faceted material but it’s then juxtaposed by the organic plants. I’m interested to see how it rearranges the space and how people operate in it.■

Special thanks to Urban Garden Center NYC for providing the plants.
Previous Wilshire Blvd by Adrian Gaut
Back to Top
Next Malin Fezehai