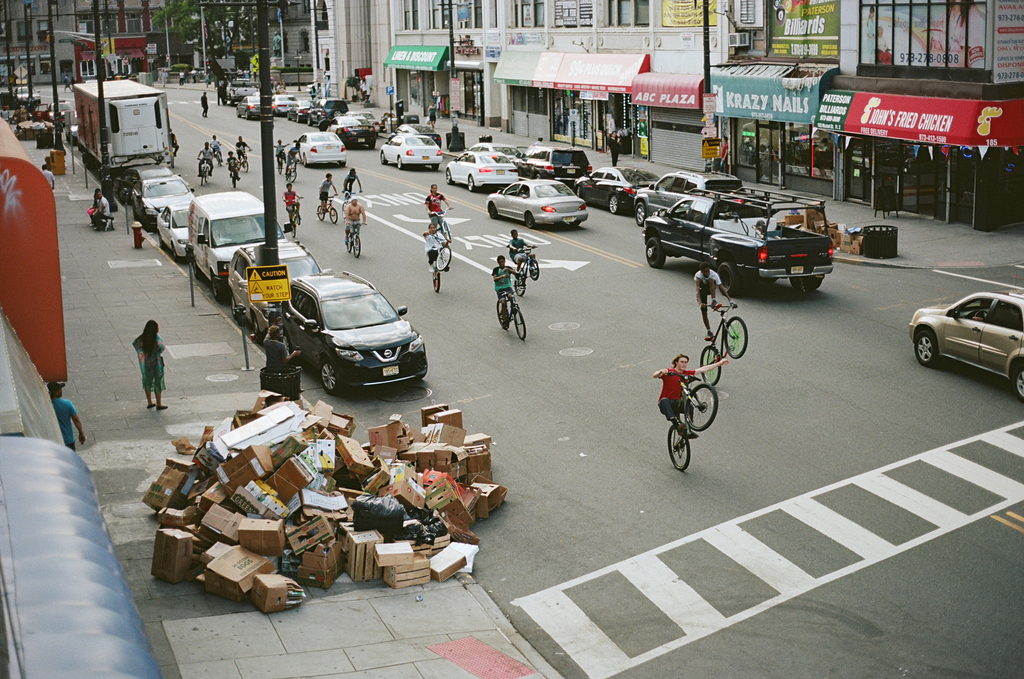 A product of Paterson, New Jersey, photographer Nolan Price has a penchant for capturing the spontaneous and subversive. In his latest work, “Boots + the Bomb Squad Boys,” Price finds himself weaving in and out of Paterson’s streets alongside the Bomb Squad bike crew.

As America’s first planned industrial city, Paterson, New Jersey flourished in the 1890s producing textiles, firearms, and railroad locomotives through a web of mills and factories. It was here that the first Colt revolver was built, the first submarine was tested, and massive amounts of silk were made. Paterson’s latest product is a bike crew composed of local youth who find refuge on the city’s roads. Dubbed the Bomb Squad Boys, they’re the focus of photographer Nolan Price’s new book, “Boots + the Bomb Squad Boys.” We sat down with Nolan to discuss his relationship with Paterson, riding with the Bomb Squad Boys, and Fetty Wap.

rob lim: We originally met skating growing up, and I just remember you coming around with company I was riding for, and you were kind of riding for them too. How did you make the transition to photography? How did you even run into these kids?

nolan price: I basically met the kids through one specific individual of the crew. His name is Boots, and for the past two years or so I’ve been working on a project featuring the illegal dirt bike scene in Newark. On certain days, usually on the weekend, they’ll practice in a parking lot. I was in the parking lot one day, and they were all on dirt bikes except for one kid who was on a pedal bike. He stood out to me. So I approached them, we exchanged names, and I asked him where he was from. When he said Paterson, I immediately exchanged phones numbers with him, because I knew he was rolling with the Bomb Squad Kids. So I met up with them that week and we started shooting. After seeing the first handful of rolls that I got back from the shoot with them, I immediately knew that this was going to be my next project. It ended up going a lot faster than the dirt bike project.

rl: So for those people don’t quite understand, there was a phenomenon with the 12 O’clock boys, a dirt bike crew, and now we’re talking about a pedaling crew?

np: Yeah, it’s something very new. The dirt bike craze has been around—I’m not exactly sure how long it’s been going on for—but the pedal bikes, I think it’s been the past few years. It’s so new that there are only certain cities that have a scene. You’ve got New York, you’ve got Philly, you’ve got Camden, which is kind of the Philly scene, and you’ve got Boston. It’s all mostly East Coast, but then you have Paterson, New Jersey which, if you know the city, is an interesting place for this bike scene to jump off from.

rl: Yeah, definitely the grimier of the bunch. And that’s interesting because I feel like, as a skateboarder, that nowadays, this is kind of like the new, real skateboarding. Because skateboarding is so mainstream now. What was the initial attraction to the pedal biking?

np: I think it came because my brain was already focused on the dirt bikes. So I was already shooting a similar thing—people on one wheel going through traffic. And the second I knew about them doing this, I immediately wanted to take photos. I’m constantly comparing it to skateboarding, and now that I’ve been shooting more videos with them, I’m thinking about skate videos that I’ve seen all the time. But when I think about filming something, I think about doing lines and I think about doing one trick. I think about stuff like that. This is something that’s so new to the kids that they’re not even thinking that way yet.

rl: Let’s go back to how you got into shooting photos in the first place. I remember you were working on shooting graffiti, and you have some history in that as well, right? Can you tell us a little about that?

np: My father is a photographer and a videographer, and I was always around it growing up. He always had a camera in our face, and when I got into high school I took a class. We had a dark room and we would shoot photos in all film and we would develop it. I was definitely very into it, but I was fully distracted. All I wanted to do was skateboard. I was also into graffiti, so if I wasn’t skateboarding I was thinking about doing graffiti. So I really neglected the camera and didn’t pursue it or even bring it out with me. Later on, I started having some problems. I started having issues with my legs and it prevented me from skateboarding. I had gotten in trouble from graffiti, so I wasn’t doing graffiti anymore. I also used to go out and party and drink a lot. I couldn’t drink anymore because it affected my legs. So with that, other doors opened and photography was one of them. I still needed the excitement, the adrenaline. I couldn’t go out and do graffiti, but I was going out with my friends and I was looking them out. And while I was looking them out I started taking photos.

rl: So what are you working with right now? It looks like you shoot mostly film.

np: Pretty much all the projects I work on, I specifically use film. I like the way it looks. I like the way the film captures the light. I like the whole process. For the night time graffiti photos, I use a digital camera. Everything else I do prefer to shoot 35mm film. It’s more of a quick on-the-go thing with the film camera, and I like the excitement of seeing what you get back. Sometimes you get two photos that are good off of 36 exposures and sometimes you get 20 of them so it’s always different and that’s something that I do like about it.

rl: I know you’ve got some crazy stories from being involved with this

np: Paterson is extremely bad, it’s extremely poor, and a lot of times you can’t go into these neighborhoods without having a problem. These kids are celebrities. The drug dealers know them, the normal passersby know them, everybody knows them and everyone supports them and thinks what they’re doing is cool. So I’d go out with them and you’d see everything. One thing that does happen pretty much every time I ride with them is the people in their cars to try to run them off the road. Drivers are the only ones that aren’t the biggest fans of these kids, because they’ll be going a little bit slower on the road and people want to speed up. It’s insane what I’ve seen as far as the drivers, they really don’t care and they’ll speed 50 miles an hour on a side street past these kids two inches from them doing and wheelie.

rl: So these kids are on the roads doing wheelies and other tricks and they’re riding with the traffic?

np: With it, against it, through it, on the sidewalks, through pedestrians, through traffic lights. They really just do whatever. They go right into intersections. They’re just on their own. They’re just kind of taking over the city, and they love it. They love being in control of where they can go and what they can do. The freedom.

np: Yeah, well, you know, I didn’t have problems pretty much the first whole entire year going out with them but then towards the end there was a couple of occasions when people came up to me—just guys on the block—and they tried taking me off the bike or even just walking away with my bike.

Yesterday I saw a girl as I was driving, daylight out, going to meet up with the kids. She was pulled over on a main road. She couldn’t even wait to shoot up. She pulled over against the curb, got out, sat down on the curb next to her car and she was just shooting up into her foot. Couldn’t even wait! Pulled over her car, got out and started shooting up. There’s tons of heroin in Paterson and you see the effects of it all over.

rl: I haven’t spent much time in Paterson, but the two times I’ve been there, on a whim, and I didn’t even know I was even there I don’t think, you can tell that you shouldn’t be there. But you’re residing there right now right?

np: I am. I’m living there now. It’s where my family is from and I’ve always gone there skateboarding, and I’ve never had issues even with graffiti I’d always be there riding my bike through the city to meet up with people. You pass through these neighborhoods at 1:00, 2:00 in the morning and I’ve never had any issues. I realized from a friend who grew up in Paterson—he’s blonde with blue eyes—but he grew up in Paterson and he’s not from the best neighborhood either. But he said to me that he can’t go anywhere in Paterson, and that I have an advantage because of the way I look and my ethnicity that I can go pretty much anywhere in Paterson and fit in a little bit easier. You don’t ususally hear about the actual crime going on besides the drugs. I talk to my friends from other cities I think are extremely bad, talking to friends from the hoods in Newark and the hoods in East Orange, they’re all scared of Paterson. A lot of people don’t really go there and there’s a reason why. They get taken advantage of. They get jacked basically.

rl: I’m blanking on the rapper from Paterson…

rl: So he’s telling the truth?

np: He is. And actually, I’m not sure if it’s his record label or production company RGF, they have a direct involvement with the Bomb Squad Kids. They sponsor them. And the kids are all from Paterson and so they all look up to Fetty. Anyone from Paterson looks up to someone that came out of there that’s doing something. They’ll see him driving and he’ll stop and say what’s up.■

Previous Morgan Wool Coat
Back to Top
Next Yumna Al-Arashi