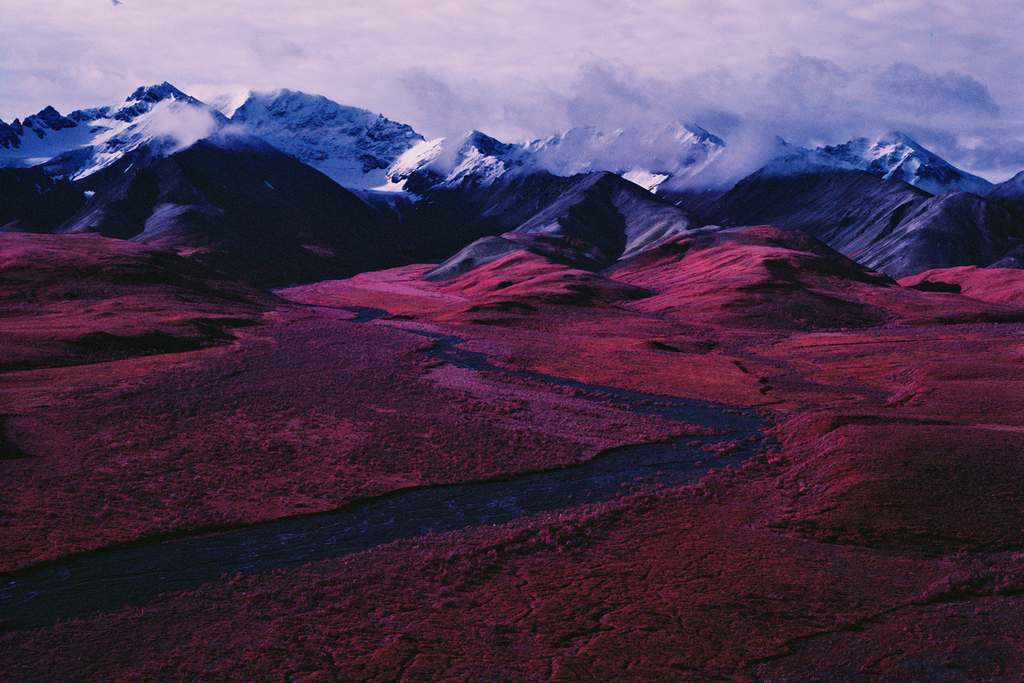 A scroll through photographer Ryan Struck’s body of work will take you across the globe—from Panama to Tahiti to Vancouver and back. Look through his latest infrared photo series, though, and you’re transported to a whole different planet.

colin tunstall: So I’m just going to jump right into it. What’s the deal with the infrared?

ryan struck: I’ve been shooting infrared film since 2012. I first saw Richard Mosse use it in the Congo. He was basically shooting conflict photos, but he was using the film as a way to humanize what was going on over there, and I was just blown away. I feel like I’ve taken a lot of inspiration from either current events or news or photojournalism, street photography, or other things like that. He’s definitely using it in a more impactful, I guess, important way to draw attention to a conflict area that a lot of us don’t really know much about. But I decided I wanted pull in slices of inspiration from that as well as put my own flare into it. I travel quite a bit shooting surf photos and meeting people, and I guess I wanted to borrow from him. I mean, he’s not the only one to do it. Jimi Hendrix had a cover shot in infrared. It’s been around, people have been using it. I just decided that it would be something cool and different, and a way for me to keep shooting things for myself. I didn’t necessarily realize what it was going to turn into, but I’m pretty happy with what I’m seeing now. It’s cool to put it all together in a collection.

ct: What’s the biggest surprise you’ve had? Because you’re shooting film and you have to wait and see what comes back. What kind of experience have you gone through playing around with this format?

rs: To begin with, it’s a pretty rare film. There’s this eccentric guy, he’s from LA, and I think he lives in Germany now. He bought the last stocks of it, and he’s been cutting this film for money. He’s just been selling it through the internet and that’s kind of how I discovered it. It was tough to get ahold of, it’s really expensive, so I just bought a few rolls and with the first roll I brought to Tahiti, I messed up half of it. I found that the experimentation process was really what was most challenging because it’s very technical. To shoot that film, you have to either have someone telling you what to do and basically trusting your own eye, or kind of just using trial-and-error. I totally just trial-and-errored it, and I wound up underexposing or overexposing everything. At one point I dropped the filter I needed in the salt water and it wound up coating it really weird. It was a frustrating but also—now that I look back on it—a fun way to bumble through trying to figure it out.

ct: How is shooting with infrared different from other types of photography?

rs: For one, you can’t look at the back of the camera. It brought the excitement of photography back into what I do and the unexpected results were always the most surprising. Sometimes it changes the color of a person’s lips that makes them yellow or changes their skin tone. Or people with blonde hair, it turns that pink or purple. It’s just this very weird, trippy experience, not only as a photographer, but it’s interesting for the subject I’m shooting. That film process kind of slowed me down. I had to really understand, “Do I really want to make a picture here?” This film doesn’t exist anymore, I only get 15 shots per roll, the rolls are really expensive, to process it is really is really expensive, to scan it is really expensive. So there’s a lot at stake. It’s really a fun, zen way of observing my surroundings again, and I think as a photographer, that’s what it’s all about for me—the way I see the world and the things I choose to experience or see with my own eyes. Bringing this film to different places for me and talking to people about it really helped change my perspective when I was using it. That’s one thing I really appreciated.

ct: You’re traveling a lot. It looks like Panama, Tahiti, New York, New Jersey, Tofino, Vancouver. What’s taking you to all these places?

rs: It’s a variety of things. Sometimes I travel to LA for shoots, and I’ve been to Tofino for both work and pleasure. But it’s tough for me to relax in a sense. I don’t picture myself going to a beach and sitting there with a drink and an umbrella. I always try to find a purpose wherever I’m going. A lot times with this film, I travel for my own sake to go and make new images in a new place. Sometimes I’d be traveling and shooting for work at the same time. But I’ve found that I was most inspired when I was traveling. That’s almost cliche to say because we’re all excited when we’re going somewhere, especially somewhere new. I also shot in Harlem when I was living there. Central Park was a big part of me living in Harlem. I’m an avid runner and it felt like my little oasis in the city. It felt like a place where I can go and get that outdoor space and I can get that solitude. Even if the park’s packed, I can go through different little sections, and it’s very green and there are lots of trees, so that sparked my inspiration to shoot some of the film there. When traveling abroad, it’s a mix of both and I find that travel for me is an essential part of who I am. It does allow me to refill the inspiration bucket. It allows me to meet new people. When I travel, it’s like I’m the best version of myself. I’m a little nervous, but it’s kind of a freeing experience. When I’m home, I’m in my routine, and I feel like I know what’s going to happen, but when I’m on the road, anything can happen, and that’s the beauty of it for me.

ct: A beautiful image is subjective, but with these, the colors are wild, the infrared process has a great narrative, especially with what’s left and how expensive it and the challenges of getting an image. I guess one last question would be, with your photography career, how much is surfing part of the equation?

rs: Surfing is totally an ebb and a flow for me. It’s a conversation I’ve had with my good friend Tyler. He has those same sentiments. Sometimes he’s out there ripping, and then at other times he’s saying, “Ah I just don’t feel like surfing.” Surfing’s funny like that. We can step away from it and we can also return to it too. For me, surfing and photography go hand-in-hand. I credit surfing with everything photography has brought me. I built my first portfolio on the guys I saw surfing. It’s given me everything from friends to a career. I don’t always shoot surfing for money, it’s just something I really love. It’s more of a passion, and I don’t often get hired by surf brands or within the surf industry. When we’re out there in the water, it’s the purest form of happiness, and it’s kind of like nothing else matters. You’re not thinking about anything else, you’re just in there, in the moment, riding the wave or paddling or duck diving or holding your breath. It’s all these things I think that so many people are finding in meditation, that I think as surfers, that’s something we’ve found for years now. I owe everything to surfing, I really do. As much as I’m sometimes caught up with work and I can’t get to the beach, I’ll always have surfing, I’ll always have surf photography, and I’ll always be forever grateful for it.■

Ryan Struck is a photographer based in New York City. See more of his work here: www.ryanstruck.com
Previous Abaca Paper Yarn
Back to Top
Next Kasuri Dye