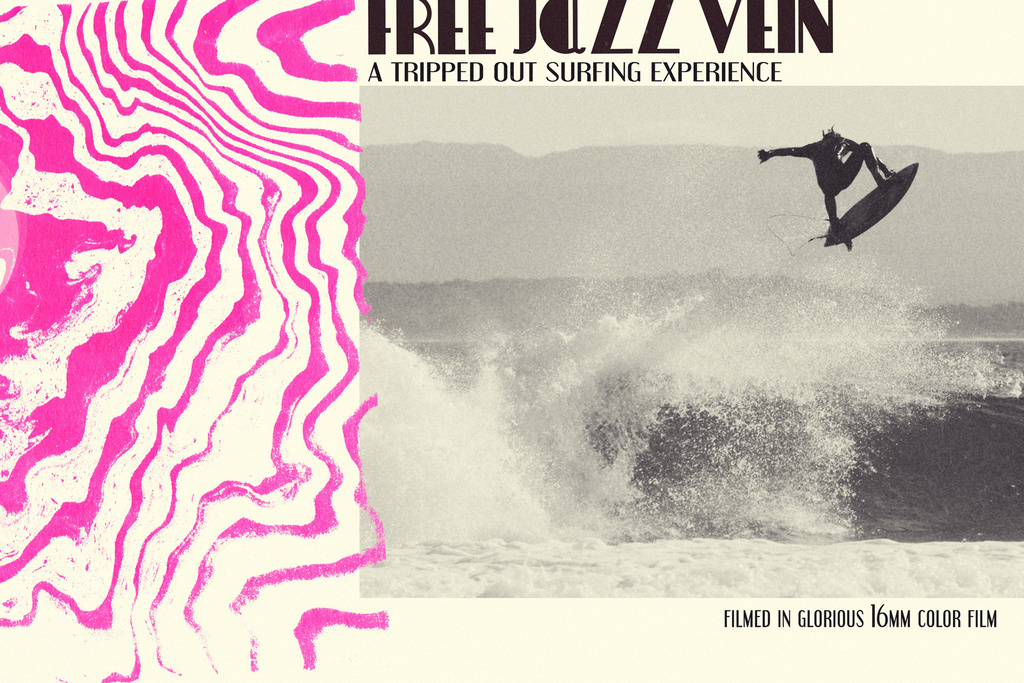 colin tunstall: Tell me about Free Jazz Vein and how this movie is different from the rest—if it’s different at all.

ct: I noticed that the title of this movie changed a couple times before it ended up at Free Jazz Vein. How did you come up with the title?

to: That’s what everyone asks me. I was in Costa Rica and bored and hot. Alex, Justin, and I were all sitting together trying to come up with the name and it went from Paranoid of Blondes to something erotic, to Free Jazz Vein. We were just talking and thinking about what the movie is about and what we could name it. We were listening to jazz and were like, “Oh this is really cool,” how jazz music—free jazz music—is improvised, you know? And Alex and Justin have that surfing style—you never know what’s going to happen, what they’re going to do next. We were like, “Ah, free jazz!” And we were looking at Justin tripping on LSD and he’s very high, it was pretty wild. We were like “Oh my god, look at his veins!” so the name came out: Free Jazz Vein.

ct: So you decided at that moment that that was the title of the movie?

to: We were like, “Yeah that’s pretty good.” It’s like the veins that carry everything—the blood and the free jazz. And that whole thing of like the free jazz non-stop and like how it used to be back in the ’70s. Musicians used to play instruments and just go crazy and that’s how I felt about the movie.

ct: I know that you’re very particular about certain details. What’s new with this movie compared to movies you’ve done in the past.

ct: Were you looking for a different surfing style in this one?

to: Yeah, less longboarding. I mean I love longboarding, but I feel like a lot of it can become really repetitive and there’s only so much you can film. Even with Alex, who makes longboarding look amazing.

ct: He surfs everything.

to: Yeah he surfs everything. And still you can only watch like one, two sections and it gets a little repetitive. I wanted to approach different styles, so I filmed a little bit of shortboarding—like thrusters, single fins, Bonzers, fish, finless and longboards. So yeah, there’s a little bit of everything.

ct: You’re lucky to have all those people like Jack Luber to help you out with that. That’s awesome.

to: Yeah it was good, but it was a little challenging at the same time, because I would show it to one person and they would say “Oh go with this,” and somebody else would say something different, so at the end it would get very confusing. With other movies I just did it, and I didn’t ask anybody. With this one I think I asked too many people about their opinions. But I think it was all about finding the right balance, and I think it’s good enough how it is now.

to: There’s one section from the East Coast which was shot like three years ago. But it really works for me because of the style of movie I’m doing, which is art and surf. I feel like California has a lot of the surf but I love the art in New York and it really inspires me. The grunge, just the New York style. It really inspired me to do all this crazy stuff in between scenes. And it’s also good because if I was in California, I’d spend too much time filming and surfing and focus too much on that. But being here and not having amazing surfing everyday, it gives you more time to edit and plan the next movie. There’s just something about New York that I love.

ct: It seems like you’re working with a lot more people on this movie. Different creative people and different photographers, cinematographers and artists. Tell me about some of the graphics and where they came from.

to: The graphics were first inspired by jazz records, movie posters from the ’70s, and old surf movies like ’70s surf movies and posters.

to: Yeah psychedelic jazz and experimental. I love that, so I tried to use a lot of it as a reference. And then also reached out to a lot people whose work I like and collaborated with them so it wasn’t just a full-on Tin movie. It’s got the Tin movie but it’s good to collaborate with people and just get more people and different minds involved.

ct: You traveled a lot for this one.

to: Yeah we did a lot of traveling for sure.

ct: It’s kind of weird talking about this since you’re just finishing this movie, but do you have plans for something in the future?

to: Yeah I want to keep doing this, because I think it’s cool and not many people are making movies. A lot of the stuff right now is just on Instagram, Vimeo or Surfline. Just quick edits. I think it’s cool if that’s what everybody wants to see, because people are always in a rush and they just want to pick up their phones and watch a two-minute video or 30-second clip or whatever. But I really want to keep this alive—this whole thing of releasing a film and going to the theater and traveling and filming and using film as a medium as much as I can. Every time that I go on a trip I always say, “Ah, not anymore,” because it’s a lot of work. You have to get lucky, you know, go and get totally skunked. Which happened a lot. But I just keep going.

ct: So you’re just going to figure it out, kind of in the spirit of Free Jazz Vein.

ct: Do you have a best and worst moment in making this movie?

to: I think the best moment is going to be May 18th.

to: Yeah that’s going to be the best moment, and I’m really anxious about it. I think it’s going to be awesome when I see it all come together. There were some other good moments too. Every time you get your film back and everything is there it’s a really good moment.

ct: Did you ever have a problem with not getting film back?

to: Yeah I had a problem in Costa Rica. We camped for a week and shot like 20 rolls and none of it came out. That was probably the worst moment.

ct: There’s going to be an art show and book signing as well?

to: Yeah we’re going to do both. I’ve always wanted to do a book for every movie I’ve made, but I’ve never had the time because I was usually editing until the premiere or the day before. And then after that I would be burnt out and like, “Oh let me move on to the next thing.” But since I finished the movie in January, I’ve had a little time and decided to do a book. I thought it was a great idea, because I collaborated with other amazing people and artists like Kim and Alex and Dane and photographers and this guy Simon who’s helping with the graphics. So yeah, the book is pretty nice. It comes with the DVD. We’re doing a book signing May 19th at 303 Gallery as well as a group show with some other surfers and artists who helped out with the movie. That’s going be there for a couple days to a week.

ct: Oh sick, so it’s going to be set there for a little while.

to: Yeah it’s going be set there. Not for the whole month but for a little bit. It’s just another way to get people psyched about the movie. It’ll be nice and something different.■