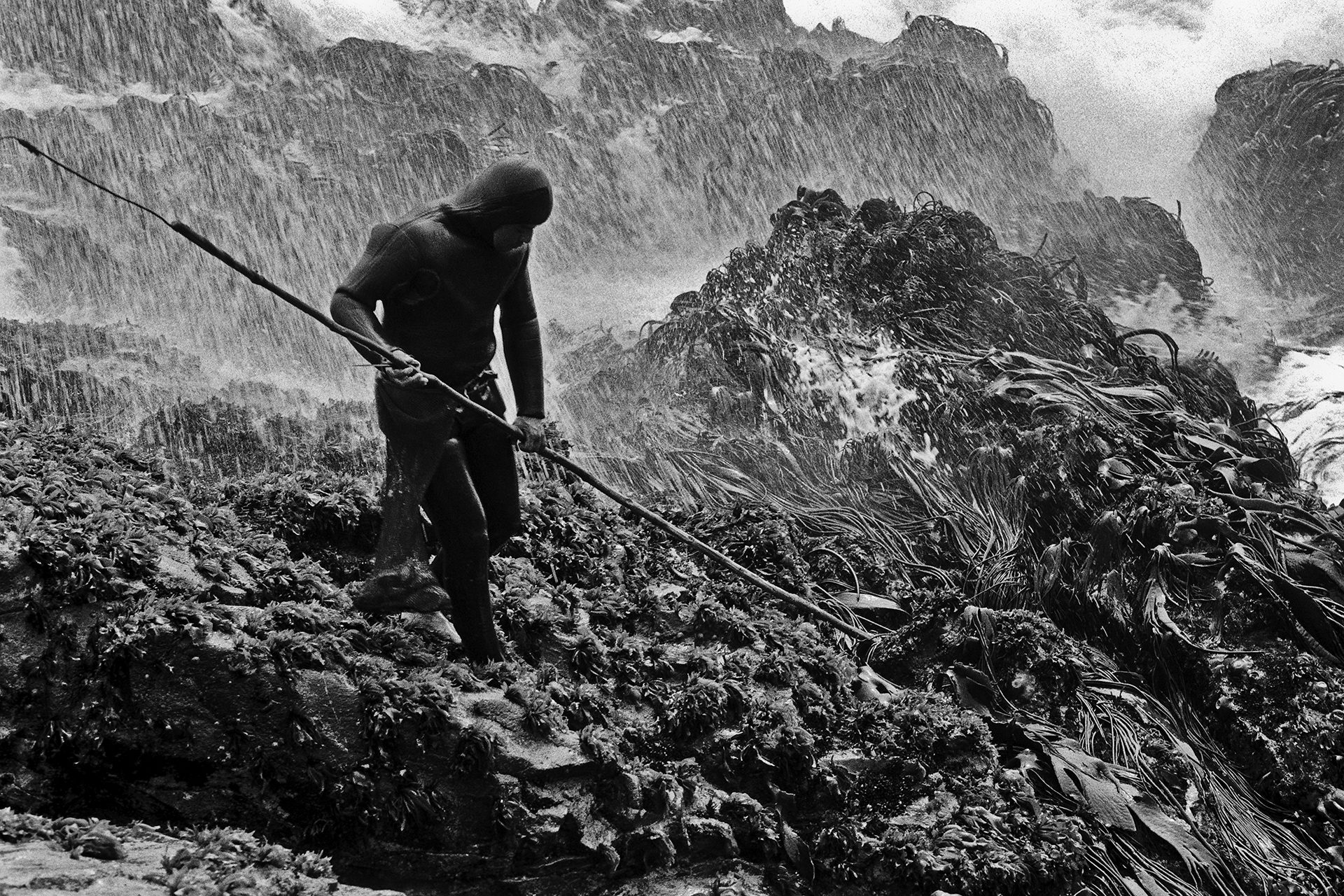 Having traveled to the edge of the world and back in the 2010 films 180 Degrees South, Jeff Johnson is no stranger to extreme conditions. With a body of work that traverses a wide range of altitudes and climates, he manages to maintain an off-the-cuff, documentary feel that adds to the excitement of his locations.

So I grabbed my camera, and it was one of those special moments. You can work and work on photographs, but the best photographs are the ones that present themselves and all you’ve got to do is push a button.

zb: Where exactly was that one taken?

jj: Down in Chile. I was climbing some rocks over the ocean, and there’s all of these waves crashing around it, and out of the side of my mind I saw these things jump up and I thought, “What was that?” Then I looked over and it was gone, and all of sudden it popped up again, and a wave crashes and it dives in between these crashes. It looked like a creature from the Black Lagoon or something, because the wetsuit he was wearing was just ancient, and he had this little sack full of abalone and some homemade spear. He would basically pry these abalone off the rocks, and when a wave would crash, he would dive down and wedge himself in the cracks. The waves would crash all over him, and then he’d get up and work again. So I grabbed my camera, and it was one of those special moments. You can work and work on photographs, but the best photographs are the ones that present themselves and all you’ve got to do is push a button. It was just a really lucky shot.

zb: I’d love to talk a bit about the climbing stuff. There must be a lot of planning that goes into the angles you get in those shots. How do you choose which routes to climb?

jj: There’s two different ways that can work. One is that you’re just doing a climb that you want to do and you bring a camera along with you and see what happens. A lot of times that’s hard, because you’re climbing with your group, and it’s hard to get a perspective when you’re with your group. You have to get a certain distance away, so sometimes you might climb a route where it’s two groups of two. Another thing is that you think of a shot in your head, or you saw a photo, and you’re like, “I want to come back here and shoot that.” Then you have something in mind, and that requires a lot of work. Depending on how big the climb is, sometimes just rigging a shot like that can take a day or so, just getting ropes fixed so you can climb the rope and get all set up. It all depends, but a lot of that does take time. Last week I was up in Yosemite, and we shot up on top of El Capitan, and that’s like a 3,000-foot cliff. We actually hiked up the back, which takes like half a day, and then we repelled off the top. Normally it would be like two or three days or four days before you got to those top peaks where you shoot, but if you do it this way, you climb up the back, repel off the top, wait for good light, and then shoot it. But that was the first time I had done that on El Cap, and it was really bizarre, because usually getting up that high is like a three or four-day progression and you get used to this really bizarre world that you’re living in. This was really surreal, because you’re going from just hiking, and then all of sudden you’re in this strange, crazy world on the top of El Cap. Even the guys who do it all of the time say that those first couple minutes repelling into El Cap is just gnarly.

jj: Yeah, you’d love going there. There’s little waves in town, so you can just bring a shortboard and surf every day.

zb: Are you still shooting with a range finder for a lot of stuff, or have you migrated a little bit back to digital?

jj: With film and digital, I don’t really think one is better than the other at all. I still shoot digital all the time. I shoot my Canon with all its lenses and stuff, but I’ve developed a relationship with Leica, and they’ve been giving me cameras to test. One guy there turned me onto the Leica Monochrome. It’s basically like shooting a Leica M7, but it’s digital and it’s just black-and-white. It’s kind of my favorite combo, because with my Leica M7, I mainly shoot black-and-white film, so I’ve been shooting with that a ton. I fell in love with it. It’s not necessarily something I would shoot with Patagonia for my daily work, because it’s so specific. It’s become sort of the camera that I have on me at all times.

zb: What kind of stuff are you working on now? Do you have any big projects you have coming up?

jj: Yeah, I always have something going on. For Patagonia, the Malloys and I are building a book. It’s kind of loosely based on this environmental line, and we’re just documenting all of these people involved in it and the materials. Then I have a personal project I’ve been working on for five years now that hopefully I’m going to wrap up this fall. It’s a book of skateboard photographs from the late ‘70s and early ‘80s. It’s all from the East Bay of San Francisco, and it’s all these guys I grew up with. I didn’t take any of the photos, I just collected all of these photos over the years from these guys, and people’s moms and sisters. It’s all these really unique photos from that era. The whole point of it is that we’re not the same old players, like Cavalero, or Hawk. We’re basically the everyday guys that were into this.

zb: How did you and the Malloy brothers get to know each other? You lived together in Hawaii, right?

jj: Chris and I met at some party. We had a couple mutual friends, and the funniest thing is that before we moved to Hawaii, we both had tried rock climbing, but never got into it. A mutual friend of ours saw that I had these climbing shoes in my room and she said, “Oh, my friend Chris has those climbing shoes.” So I remembered that and when I saw him I said, “Hey, I heard you climb a little bit.” And he was like, “Yeah, a little.” For some reason, both of us had this fascination with climbing. We knew about it and we had read about it. It was one of those things that we both thought was really interesting, but neither of us had really done it. So that was the conversation that we were having that was different than the common North Shore thing where everyone’s like, “Hey, did you get in the water today? That pipe was good.” So I think that’s why we hit it off. Then I found this house on the beach that was a killer deal and I heard that he was looking for a roommate, so it was me, Chris, and Noah Johnson. We all got this house in 1995 at Rocky Point. Then Noah moved out, and the two brothers, Keith and Dan, took Noah’s room. For like ten years, we all had that house. It was a classic, classic house. We always had slideshows of photographs there, we had a climbing wall in the garage, we had a million surfboards, and we had Hawaiian canoes in the yard. It was a really cool scene for ten years or so.

zb: It’s so interesting that the connection came through a pair of climbing shoes and then ended up coming full circle to Patagonia Surf.

jj: Yeah, it’s so weird. 180 Degrees South was a culmination of a lot of things Chris and I had been discussing for a decade. We talked about that forgotten film that we found. I was visiting Ventura in like 2000, and my friend handed me that movie and said, “I was at Patagonia and I snuck this out of the vault. It’s been in the vault for like 30 years or something, and no one is supposed to see this outside of Patagonia, but I think you’d really like it.” I took it to Chris’s house, and we watched it and were freaking out because this thing has just been sitting around. Eventually began talking about doing something in the spirit of that film. So we talked about that for a while and even made a false start in Australia doing a climbing and surfing thing. But later, when Chris and I were working at Patagonia, we brought up that conversation again. We thought of that idea way before we even began working for those guys and we were like, “Now that we work for the guys, let’s do this.” That was like a six-year dream before we even started.■

Back to Top
Next Bjorn Iooss On The Road