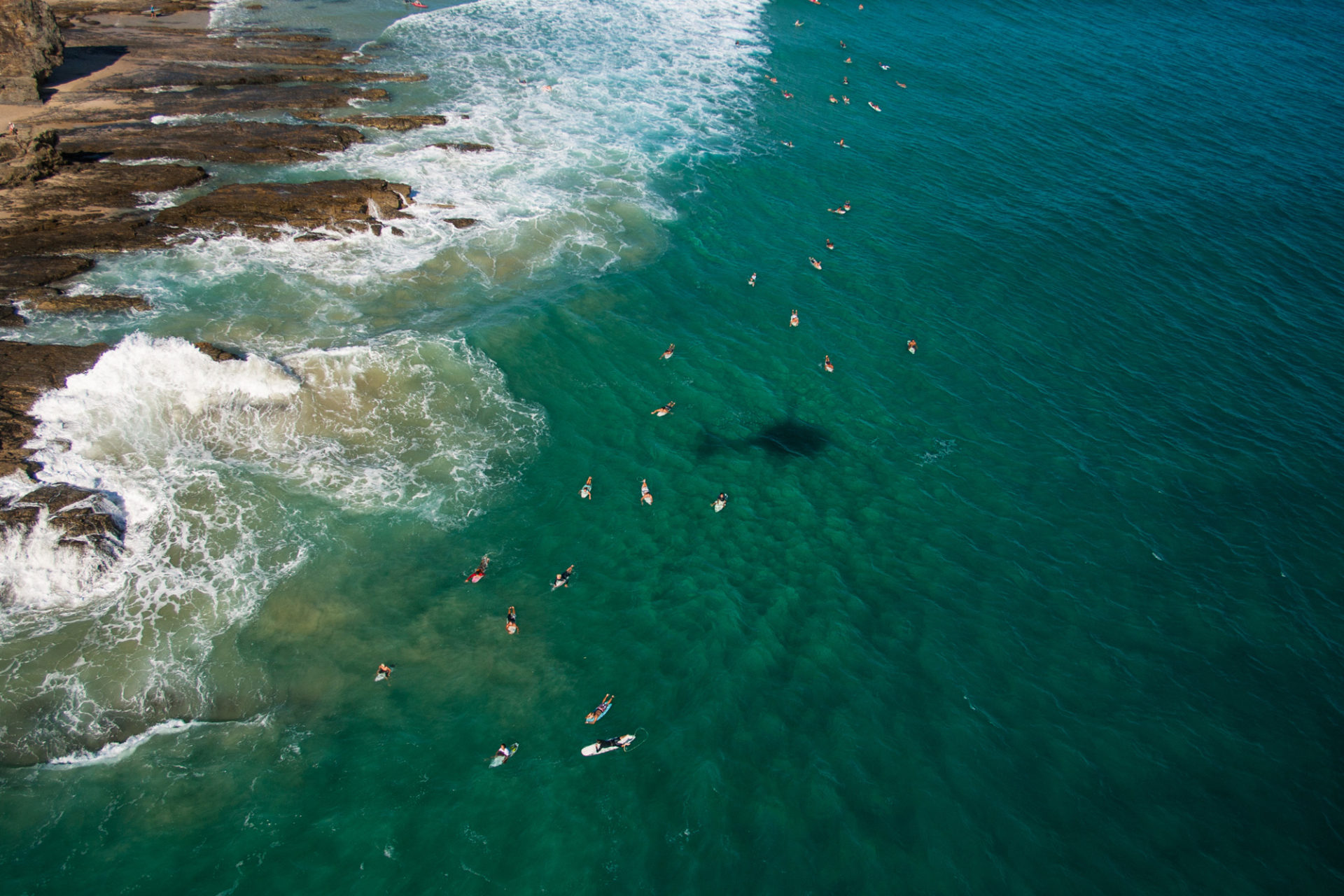 Surf photographer John Respondek has his head in the clouds. Shooting from a helicopter, he has been able to catch unreal, aerial angles of some of the best surfers in the world doing their thing.

luke flynn: Hang on a second, I’ll just try and get it up.

jr: You always have that problem, huh?

jr: Can you see my head?

jr: You don’t understand, I have been in the sun and the salt water all day. My head’s about to fall off

lf: Are you at Taj Burrow’s House? Are you guys shooting for something?

jr: Yeh, at TB’s house in Yallingup, Western OZ. God’s country. Here for ten days. It’s the most glorious weather you can imagine, the waves and conditions right now. Just on a break, not shooting anything in particular, but there is a crew here and we are taking some shots, and there has been the most amazing sunsets in the afternoon, so we have also been enjoying some afternoon beers on TB’s balcony.

jr: I don’t know if I can tell you most of that stuff, it of course involves surfing at some point, but probably just for an hour or two, and then we’d do better shit.

lf: (Laughs) Do you just surf out the front of his house?

jr: Actually, it’s the complete opposite. You have to get in a four-wheel, drive for an hour across dirt and sand, and then walk along all these rocks before you even see the beach.

lf: The photos in this series are all from the air, which a lot of your photos are. Are you addicted to choppers?

jr: Yep, that’s what the whole spread is.

lf: When did the addiction for helicopters begin?

jr: The first time I ever shot from a helicopter was with my friend Shane Moran, who was working for the brand SMP at the time, back in 2000, or something. We went to Bali and he got the Helicopter to shoot a competition he was working for. I loved it. The ocean and the reef looked so different and cool from up there at that angle. I knew I wanted to keep doing it. I love them. It’s exciting!

lf: You also took a shot with Taj jumping from a helicopter onto a wave? Was that another excuse to get in the sky?

jr: That actually wasn’t my initiative. Sam McIntosh from Stab magazine came up with that and wanted to try it. It was based off seeing Danny Way do it on a Skateboard into a ramp. We thought, “Why not do it on a surfboard?”

lf: You shoot a lot of Taj. How did you and Taj meet? Was it love at first sight?

jr: Of course, he’s only human. (Laughs) I can’t really remember the first time we met, but probably in Hawaii. In the very early days we did a trip for Waves magazine called “Seven Days, Seven Slaves.” We became mates and we kept travelling and shooting together.

lf: How long have you been in the game? If you dig through some fairly vintage surf magazines–at least vintage by today’s standards–you’ll see your name pop up.

jr: I think almost 15 years, but I don’t really know exactly.
lf: How did it come about?

jr: When I was in high school, I was into photography. And I’ve always surfed since I was a kid, so I tried to put them together. I enjoyed it. And it got better and once magazines started running my shots. I was pumped that it worked.

lf: Your career is based around surfing, it’s obviously a passion. But you’re the guy in the line up with a camera, not a board. Do you get jealous sometimes?

lf: Do you get thrown over the falls, or smashed by the waves while you’re bobbing around out there?

jr: Yeh, a little bit sometimes. Over the years though you get used to that. It happens less if you swim to the right spot. I mean, hopefully it doesn’t happen too often.

lf: I imagine you get to surf a bit before and after anyway.

jr: Of course, whenever I’m travelling around with the boys. Sometimes they don’t want to surf–they’re at lunch, or its cloudy and shitty–and I’ll sneak out.

lf: Does anyone ever take photos of you surfing?

jr: It happens. All of us photographers and video guys will all shoot each other. I always love getting a little shot for the personal file.

lf: You’re looking pretty good these days. Some would you’re getting younger with age, like Benjamin Button. What’s the secret?

jr: Not right now. My head is so weathered from 48 hours of sun and surf. The secret is probably having fun.

lf: Where is home at the moment?

jr: I’m between Sydney and Kiama, on the south coast of NSW. I have actually been shooting down there a lot more and getting people to come down. It’s such a little untapped resource. There are so many great spots. People are starting to realize it and I love it–so many good spots for barrels, airs, and all kinds of shit.

lf: Is surfing the only medium that you’re passionate about?

jr: Not at all. I’ve got a heap of things that I want to get involved with in photography and out of photography. I’m enjoying shooting lifestyle within the surf industry more and more, it’s something fun and new.

lf: Did you ever shoot on tour (ASP)? Are you now?

jr: Yeh, a little. But it’s as boring as bat shit. It’s fun to travel around and go where the Tour goes, but actually shooting competitions and what not, is absolutely the lamest thing ever. There is always good parties after and during the comp and that’s fun, but you don’t get paid to go there and party, so you do it for a couple of years and the novelty wears off.

lf: Who do you mainly hang with and shoot with?

jr: Obviously, Taj. I travel with him a few times a year. Definitely my closest guy in the industry.

lf: Do you have a favorite spot to shoot?

jr: That’s hard. I do like it over here in Western OZ. It’s probably the best stretch of coast in the world in my opinion. Indonesia is amazing all over. I don’t have a favorite spot exactly. It’s fun in Bali to surf and hang out, and Mentawis is the best waves you could ever ask for.

lf: Who inspires you? Are there people you look up to?

jr: It’s always changing. There are people who I think are doing awesome things at any particular time. There will always be a couple of people that are new and different and doing rad stuff that inspire you and push you further and make you say, “Fuck yeah!”

lf: You also had a garage gallery in Sydney for a while, which showed artists like Ozzie Wright.

jr: I wanted to open an art gallery in Bondi, and I found this really rad venue. I started it up and it was pretty cool. It was great times and fun parties and an interesting experience. But it was hard to turn it into dollars, so had to shut that one down, unfortunately. Man, we had some good parties there.

lf: That’s for sure.

jr: I’m about ready for a new venture. Don’t know what it is yet, but I’m interested in doing something new–maybe it’s a bar, maybe its something else. I’m just open to the idea of it. I think it’s important to do other things. As long as it’s something creative, then I’m happy.

lf: The surf industry is changing a lot. People are more aware of surfing, more people are in the water, more coverage of competitions, but on the flip side there are less sponsorships and money. Is it changing for you? Are you affected?

jr: Everyone in the surf industry has been affected by it over the past couple of years. As soon as the global financial crisis came in, surf companies had turned inside out. They stopped spending money on marketing and photography and film shoots and what not. It’s been a bit rough, but it feels like we are coming out the other end. Now we can hopefully do some cool shit again!

lf: You have Kelly Slater at the start of the feature and Mick Fanning closing out the feature. How do you rate their surfing? Who do you think will win the world title this year?

jr: Fanning. I’m saying that because I want him to win so much more than Kelly, but also because Kelly has to win pipe to win. But actually that’s not really that hard for him, is it?

lf: Do you have a favorite surfer to watch?

jr: Dane Reynolds. How could anyone be better? He’s incredible. I have a lot of favorites, but he’s the best there is at the moment.

lf: I got a chance to see that first hand at the New York Long Beach event, pretty special. It was also cool to have an ASP event so close to the city. You came out for that too. What do you think of NYC?

jr: It was my third time in NYC. I was there for a couple other shoots and once for fun. It’s my favorite city in the world outside of Australia. It’s so rad! The place has so much character, and I love partying there. I haven’t been able to surf there yet. I would love to go out to Montauk with the lads sometime.

lf: Have you had the opportunity to shoot here at all?

jr: I’ve shot a little bit in Long Beach and out that way. We shot in Atlantic city once, but it sucked.

lf: I have actually seen a photo of you in the Hudson, next to the Statue of Liberty. Please elaborate.

jr: We did this novelty shoot a few years ago for an eyewear company. We went and shot surfing on boat wake while trying to get New York landmarks in the background. We got a couple of sick ones with the Statue of Liberty and the Brooklyn Bridge. It was such a crazy thing! We had a full police escort and everything.

lf: Do you often come up with random ideas for shoots? Try and get a new angle?

jr: You always have to adapt to the conditions and the surroundings. When the surf isn’t pumping, it’s cool to find different angles, foregrounds and backgrounds, etc. I love trying to do new and random ideas for a shoot. I plan to shoot a wave pool from a chopper next.■

Previous Boo Hooray
Back to Top
Next Danny Kwock